UK Comedian being one of the few straight drag acts, provides a new idea to give a Hen Show a completely different flavor. It's believed that Adrian the UK Comedian honed his approach to having so much fun with the girls, whilst working behind his granddad's butcher shop counter.

As we all know there's nothing like the cheeky butcher, add to this the party atmosphere from two of our most loved family characters, in particular Mrs Doubtfire and the sharp whit and authority of Adrian's tribute to the Dame Edna experience. Contact us now to book Adrian or discuss your requirements. Below is a small gallery showing some of the male strippers that Adrian works with. We're sure the Ladies will be pleased....

It is not widely none that the ODDBALLS comedy show is a great hit for a Hen Show with its cheeky side being ideal for these of you who would prefer a slightly funnier rather than naughtier evening,

As you will see many of our TV house hold names have joined the ODDBALLS on stage here you see star off chitty chitty Bang Bang,

Al Johnson, IT only a puppet, the Brian Conley show, Jim Davison , Dave LEE , and many more all love the Balloon Dance . 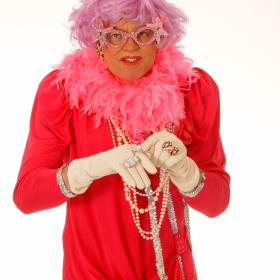