Adrian Doughty's years in stand up comedy have taken him all over the UK. He's worked the most glamorous 5 star venues including Sunday Night at the London Palladium and many other theatre's.

After the decline of mainstream comedy in the late 70's and 80's, stand up comedy has never been more popular as it is today. From the Apollo Hammersmith to Jongleurs comedy clubs to Comedy central. This rise in popularity has seen comedians, in particular UK Comedian Adrian being hired for many different occasions. They were diverse as entertaining our troops both leaving and returning from active duty. From the catering core to the officers mess. From weddings to civil ceremonies, anniversaries, birthdays for 18 year olds up to 100, corporate functions and presentation evenings.

Adrian comments "To me I would rather have twenty folk in a BBQ ready to be entertained with different comedies than a 1000 in a upmarket venue who are trying to catch up with old friends. That said, as the many pieces of video footage shows, Adrian has had many great nights in some of our most prestigious Golf Clubs, Masonic Ladies Nights and the highlight being Sunday Night at the London Palladium."

He has also been called into companies for team building days. Not to mention many after dinner entertainment shows for corporate evenings. As for corporate events, what better way to get the vibe going then to call in a comedian to wake them up ready for your message...

Like stand up comedians Jim Davidson OBE, Jimmy Jones and Mike Reid, Adrian cut his teeth in the back streets of London. With all the volatility you would expect. It's at these venues you'll witness the high octane performance's. As the size allows for close comedian and audience interaction. In these environments you'll see the UK Comedian (Adrian Doughty) take no prisoners as he takes command of the room.

What brilliant era we are in with comedy clubs on every corner, Britons got talent, The 99club, Such names as ,John Bishop, Peter Kay, bring the good old gag back in vogue So comedy not just in the south coast , Eastborne, Brighton, Hastings, Worthing ,Bognor, Guildford, Sussex, London , Camberly, 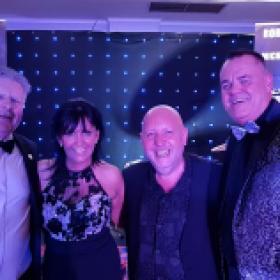