Adrian has plenty of pub entertainment ideas that can boost sales in these troubled times.

Some ideas for pubs include hosting a show where comedian Adrian will come along with a few other acts. The acts can be tailored to your audience.

Gentlemans Evening or a Ladies night

A gentlemans evening is great for pub entertainment. He'll come along with a few strippers, who'll put on a show as instructed. Just let us know how rude....

Likewise, a ladies evening always goes down well. Kind of the same but with Adrian pulling out his frocks as the infamous Mrs Doughtyfire or Dame Edna. He's never short of a few pub games ideas either. Have you ever seen the knobs and knockers game? Obviously he'll bring along some hunky lads for the girls..

An audience with Dave Courtney for gangster fans

Another one of his pub entertainment ideas involves coming along with a notorious British gangster - Dave Courtney. If you think that your locals would enjoy 'an audience with Dave Courtney" - it can be arranged.

The venues UK comedian, Adrian Doughty, works with often hold the pub show on a night that would normally be quiet. The pubs then sell the tickets for £15 each which easily covers the costs of the acts, whilst leaving them to make the drink profit.

Everyone's a winner you, us and your regular customers.

We can also provide you with promotional flyers and posters to help attract attention. We've also helped venues with creating the tickets too. Let us know if would require any other point of sale materials.

If you have any other pub entertainment ideas not mentioned, just get in touch.... 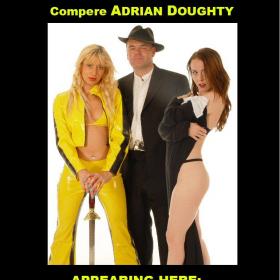