Adrian Doughty's years in stand up comedy have taken him all over the UK. He's worked the most glamorous 5 star venues including the London Palladium and many theater's.

He's also worked the roughest of pubs and club houses. It's at these venues you'll witness the high octane performance's. As the size allows for close comedian and audience interaction. In these environments you'll see the UK Comedian (Adrian Doughty) take no prisoners as he takes command of the room.

Adrian Doughty also knows and works with many male strippers. He'll be sure not to disappoint, regardless of how blue you want the show. If you want something a little more tame or want your hen humiliated in a certain way - Adrian's the man you need to speak too!

We'll be adding a gallery of some of the male strippers the UK Comedian works with soon....

some great places to stay having worked as a stand up comedian for so long. Due to the relationships he has made with them he can often negotiate good rates...

If you're a fan of British stand up comedians, you won't be disappointed with the UK Comedian as Mrs Doubtfire. Prices with be published soon. 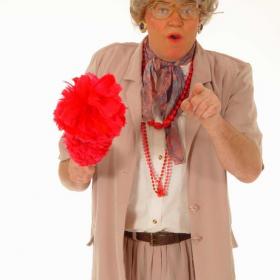