This is how the feature read:

'Women go wild for my fund-raising balloons'
Adrian Doughty, 47, is from Camberley Surrey

"I'm hardly your average hunk, so it surprises a lot of people that i take my clothes off for money.

I'm 14½st, with wrinkly knees and a beer belly.

But when it comes to raising money for charity, I'm more than happy to let it all hang out.

I've always been involved in charity work, and at one event i was persuaded to strip on stage for a group of women.

I was shocked when they all went wild for my jiggling belly and white buttocks.

A Dad of three, I realized taking my clothes off could be a fun way to make money, so i started working as a stripper.

Three years on, I was approached by a Comedian called Danny Blue. He explained that he had his own touring cabaret show, part of which involved a naked dance with balloons.

'You'd be perfect' Danny said, asking me to join him and one other guy. It sounded hilarious, and i signed up straight away.

We'd be called The Oddballs.

It took two weeks to learn the moves.

Dancing to the cha-cha, we'd prance around with different balloons, from long sausage-shaped ones to big, bouncy round ones.

Holding them over our private parts, we'd take it turn to pop the balloons in time with the music.

But, then before anyone saw anything they shouldn't, we'd quickly replace it with another.

I was so nervous before my first show. But hearing the crowd's frenzied cries as we took the stage, my nerves soon melted, I loved every minute of it.

Once I'd perfected the moves, we started doing free shows for charity. The money we raise goes towards holidays for sick kids.

We've raised thousands for Misunderstood, a charity dedicated to children with the behavioral problem ADHD.

The Oddballs have been an act for 27 years now, and we're still going strong - we still drive the women crazy.

We've been all over the world with our saucy show, and even performed alongside stars such as Bobby Davro, Brian Conley and Jim Davidson.

I'm so pleased I've been able to raise thousands of pounds by flashing my excess pounds of flesh.

I'm a bal-loonatic when it comes to fund-raising." 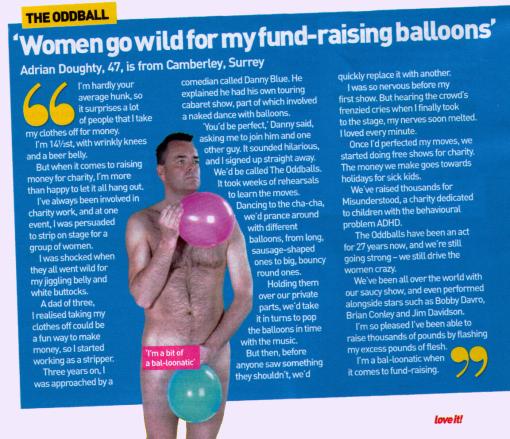